Biden Mocked For Restricting Travel From African Nations After He Attacked Trump For Doing The Same.

After the Kyle Rittenhouse verdict, Best Buy & Levi Strauss are offering counseling to employees who are distressed over the verdict. Employees can get a session with a ‘racial trauma specialist’. Wouldn’t that be an interesting job to have? 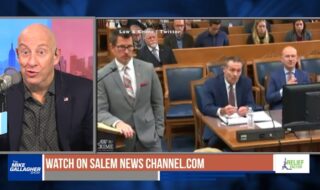 After the Kyle Rittenhouse verdict, Best Buy & Levi Strauss are offering counseling to employees who are distressed over the verdict. Employees can get a session with a ‘racial trauma specialist’. Wouldn’t that be an interesting job to have?

Mike Gallagher began his broadcasting career in 1978 in Dayton, Ohio. Today, he is one of the most listened-to talk radio show hosts in America, recently having been ranked #10 on the Talkers Magazine “Heavy Hundred” list – the 100 most important talk radio hosts in America.

Prior to being launched into national syndication in 1998, Mike hosted the morning show on WABC-AM in New York City. Today, Talkers Magazine reports that his show is heard by over 3.75 million weekly listeners.

Besides his radio work, Mike is seen on Fox News Channel as an on-air contributor, frequently appearing on the cable news giant.

Gallagher has also appeared on stage and film as an actor, with featured roles in regional theater and on Broadway. He appeared at the Shubert Theater in New York for a guest stint in the Tony Award-winning musical Memphis as the White DJ, as well as playing the same role in a number of cities on the national tour. Mike also invested in the Tony award-winning musical Pippin both in NYC and the national tour.

Perhaps his greatest passion involves supporting the law enforcement community. His charitable foundation “Gallagher’s Army: Fallen Officers Fund” provides assistance to the families of police officers killed in the line of duty. Generous donors have contributed over $1.4 million dollars while helping hundreds of families. In April of 2015, he was awarded the New York City Sergeants Benevolent Association “Heroism Award” for his steadfast support to law enforcement. In addition to reaching out to hero officer families, the foundation publishes and distributes the First Responders Bible, a King James Bible and spiritual fitness manual which is offered to First Responders to assist with the emotional and spiritual challenges they face every day (www.gallaghersarmy.org).

“The Happy Conservative Warrior” is one of the most consistently popular hosts in America. Mike’s passionate interaction with listeners and his fast-paced, fun delivery make his show appointment listening for millions of people.